The History of Computers as I know it

The History of Computers as I know it

That was a surprise.

The seventy year-old coaching two thirty-somethings on Internet marketing. I thought they knew this stuff.

They’re engineers too. I thought they knew this stuff.

But they’re fascinated by precise details of products and processes, not the inexact sciences of management and marketing.

And they just bought the company. Oh dear.

“You engineers put everything into a spread sheet.” It worked for me.

Learned faith in numbers, value of analysis. And neglecting management & marketing is a formula for failure.

Devices always on, interrupting everything.

Writing and calculating were done with pen and paper. Ball point was a new technology.

“Look it up” meant a trip to the library.

It was the 50’s. We played outside. Computers were only used by the military. IBM was a typewriter company. Graduated from engineering with a slide rule. (You can Google it.)

MBA School allowed electronic calculators. Not in exams, that would be cheating.

Computing on the job meant a terminal and modem in the office.

Welcome to AES Data, “We invented word-processing.” (“No you didn’t, we 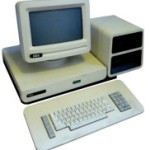 It didn’t last. Killed by the PC, WordStar & Word Perfect.

What is this beige box with a keyboard called Apple?

On to my own business. In computers. Retailers on every corner. Computers on every desktop. Riding the wave from Zero to $20 million in eight years.

Now this is fun.

New technology keeps on coming. What’s a FAX? Who needs a mobile phone? OK, I’m sold. Overnight Faxes on the floor are annoying. But it works, let’s do it too.

Marketing in the 80’s: cut and paste, print at Kwik Kopy, stuff envelopes, send Faxes. And Desktop Publishing: Look at the cool graphics! And different fonts! What’s a font?

From Engineer to copywriter and ad agency. Not pretty. But easy, cheap & it works.

And the evolution continues.

So do the mistakes. Amateurs still doing it ugly & ineffectively. But easy & cheap.

Professionals & the big boys with big budgets do it better. Winning more hearts and minds. And wallets.

But we can be quick and creative. We can beat the big gorillas with better guerrilla tactics.

Not just outrageous & attention getting. But more interesting & appealing.

Sorry, went from story teller back to consultant.