The Girl on the Sidewalk

The Girl on the Sidewalk

In spite of the light rain and mist, he slowed his pace to observe more closely the broad spreading oak, elm, and cedar over the boulevard with their tall dark wet trunks covered in 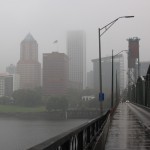 moss and vines. Along both sidewalks the street was lined with classic 1950’s style two-story, painted wood homes and elaborate landscaped front yards in bright autumn colours. He was definitely in the Pacific Northwest.

Only ten minutes from the house he had already made a half-dozen stops, adding to the photo journal that he was building for scenic ideas and descriptive details for the stories he was working on. He was awkwardly trying to keep the camera dry from the dripping trees and rain under the hood of his jacket and pulling it inside under his arm between photos.

He looked up to notice a girl approaching on the sidewalk with her shuffling shaggy wet black and white Springer Spaniel on a short leash. She was mid-twenties, slim build with bright eyes and a wide mouth, straight brown hair down to her shoulders in a grey shell and stretched tight black track pants, an attractive addition to the scene. She glanced at him in a reddish brown rain jacket hunched under a tree with a hood over his head. He made sure she saw the camera as an explanation and said with a friendly smile, “Enjoying your beautiful neighbourhood, even in the rain.”

She smiled back and said, “Getting any good ones?”

“Not yet, but I’m trying to be creative and not to use the Auto mode. That’s just too easy.”

She nodded and said, “Good luck,” as she walked past him.

Another few blocks and they crossed paths again and smiled at each other. He started to imagine her as a mysterious character and wandered what story he could create around her.

They arrived together at the crosswalk over a main street into town and waited for the lights. Another shy smile between them. He looked at her and suddenly said, “Say, could I buy you a coffee and we can take a break from the rain?” She looked startled and pulled the dog closer, as he continued, “Look, I’m a writer and I think you could be an interesting character for me, maybe. But I would like to know more of your real life story. I know that sounds weird and totally inappropriate. Sorry. I’ve never done this before, actually. Do you know you look like Emily Blunt, the actress?”

She looked flustered by the invitation and said, “Thank you, but, umm, no, no thanks. I’m going this way,” and she turned down the sidewalk and walked quickly away from the crosswalk pulling the dog beside her.

He was embarrassed and called after her, “OK, sorry to bother you, have nice walk. Enjoy the rain. Bye.”

The pedestrian light had changed, so he hurried across. That was awkward. What the hell was he thinking?

Then he smiled to himself and thought, ah well, good to be a little more ambitious and creative once in a while. The story just got more interesting. Lost in a rambling story line about a sad and lonely girl on the sidewalk, he continued over the Hawthorne Bridge and into downtown Portland. The light rain continued and he occasionally stopped in bus shelters and under overpasses to take some more photos.

The walk from the in-law’s house on Southeast Ladd Ave to downtown was 2.5 miles according to the Google map he had checked before leaving. After crossing the Willamette, he approached the city center to discover the annual Portland Marathon was in progress. Not very pleasant for the runners in the cool wet October weather, but as he watched them cover the last few city blocks inside the security enclosure, he imagined himself completing another Marathon and thought, Wow, only 55 minutes to the finish line, best time ever! I’ll have to post that on Facebook later.

He had done nine full marathons, the twenty-six mile official distance, between the ages of fifty and sixty trying to prove he wasn’t really getting old yet. His best time was 4:09, or as he liked to say, “Three hours and sixty-nine minutes.” That sounded much more impressive for his age. But the last three marathons were closer to “three hours one-hundred-and-twenty-nine minutes” and were definitely not impressive at any age. Also not much fun grinding it out for five hours. So he gave up the marathons, but was still trying to deny he was getting older.

“Thanks, Mom,” he said, smiling at the waitress and noticing again her odd accent. He went back to scanning the pictures on the small screen of his new digital SLR camera.

He was old enough to remember Kodachrome 64 slide film and the habit of taking a few carefully composed photos that cost twenty-five cents each and took two weeks to return from developing, so he now appreciated digital technology for the ability to take unlimited photos and review them instantly. But he was trying to avoid the bad habit of taking too many quick photos that were badly composed and not worth keeping, or even less, worth sharing. He often reminded himself, the difference between an amateur and a professional is that amateurs insist on showing you every picture they took, while professionals only allow you to see the very few they are proud of. He hadn’t quite managed the professional approach. He already had over sixty from his short morning walk in the rain. He was deleting a few and trying to be more aggressive, but could not resist keeping most of them for future reference.

The waitress passed by again as he was nearly finished the plate of breakfast. She was a large top-heavy middle-aged woman, dark complexion, friendly round face with too much black mascara and red lipstick, dyed black curls piled high on her head. She filled her red and white checkered shirt, but not her black jeans, swinging her hips and stepping smoothly between the tables in her black rubber-soled shoes.

“So, tell me where your accent is from,” he said, “before I have to guess.”

“I thought it was more English and would have guessed Surrey. I was married to a girl from Surrey for over thirty years. Apparently she was right when she said I didn’t listen very well.”

“Well, it was an English colony.”

“Where in South Africa?” he asked.

“No, more like Auckland, New Zealand,” she said and walked away toward the kitchen. He grappled with matching the images in his head of Auckland and Cape Town. He had been to Auckland and it just didn’t seem to fit with the photos he had seen of Cape Town. She must have had something more subtle than the scenery in mind.

He turned back to the large enamel plate with streaks of ketchup beside the stainless knife and fork, yellow bits of scrambled egg remaining, half of a Red Star Tavern pork and chicken breakfast sausage and a few brown fried potato squares. “Damn, I forget my food photo.” He took a few shots of the empty plate beside the shiny brass rail and the large stainless steel salt and pepper shakers.

Then he looked around and realized the tavern itself was more photogenic. A big open high-ceilinged room with large windows onto Aspen Street along the short side wall and onto Fifth Avenue along the wide front. White napkins on dark wood tables, some red stained, some darker chocolate, some smooth, some rippled with the deep grain, large dark wooden chairs, some with curved arms and backs and smooth carved seats, some with brown leather seats and backs, some with red leather trimmed with brass buttons.

Oddly attractive and much more appealing than the Rialto off-track betting bar where he had first stopped. It was dark, smelled of stale smoke and booze, crowded with small tables and a few patrons gazing at the wall-mounted screens tuned to the race tracks. The puffed up blonde bartender who looked like she had been there all night, said, “Sure we can do breakfast, but the kitchen only opens at eleven.”

The Red Star Tavern was busy, bright and spacious and a welcome relief from the damp cold outside. Looking around he saw a group of men laughing loudly together around a large table, a lone man in a booth by the window on Fifth Avenue lost in his newspaper, a couple in the next booth ignoring each other and gazing at their handheld blue screens lighting their bored faces, a young family with a baby cradle on the table spooning porridge into the child. The attentive staff were busy bringing food, cleaning tables and processing credit cards with their portable devices.

He put twenty-five dollars cash in the leather folder leaving a generous tip for the friendly South African waitress. He had withdrawn sufficient US dollars before leaving Montreal and did not need more charges on his US credit card.

He pulled on his rain coat and the peaked cap that were both still soaked from the walk into town and headed out into the rain. He walked down the street to the Morrison Bridge where the marathoners were still streaming beneath along the Willamette toward the finish line. He continued on a meandering route through the commercial area and residential streets back to the house on Southeast Ladd Street.

They should all be back from church by now.